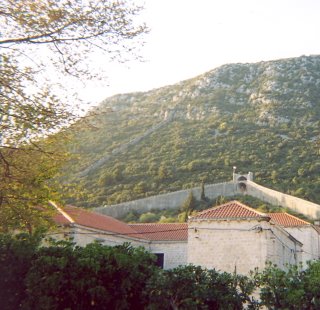 Mali Ston is south of Split on the Dalmatian Coast.  For us, driving north from Dubrovnik at the time, it is on the way to the island of Korcula.

Mali Ston is featured in the New York Times in 2019 for its burgeoning oyster business, see https://www.nytimes.com/2018/12/31/world/europe/croatia-oysters-balkans-bosnia.html

To get there, we chose a little local ferry from Orebic, at the end of the Peljesac Peninsula, instead of taking the big car ferry from Dubrovnik. Good choice because of traffic, delays at the main docks.

"Mali Ston" is the fortified point up there where the great wall ends.

The fortifications of Ston are among the longest in Croatia, providing increasing degrees of protection from invaders. As at Pag, there also are salt pans in the area.

Ston has been proposed as a UNESCO World Heritage site, see whc.unesco.org/en/tentativelists/160/.

Ston: Drive north from Dubrovnik. Watch for signs to Ston, Orebic, even Peljesac Peninsula. Get off, go across little bridge, and there is Ston - old town with double fortifications: one set of walls around the town, with a V shape at top.

Then, look closely and see another set of walls heading farther up - also a V. A place for falling back and regouping. These kinds of walls are called multiple fortified curtain walls, and they are often seen going up the mountainside, each with its own smaller fort at the apex. See www.adriatica.net/croatia/ogradu_en__.

Military matters. Remember that a retreat, even a total melting back into the hills, is not necessarily a defeat. The best strategy may be to save your lives at the time, and not stand and fight against overwhelming odds - but dissolve and regroup at some point, for a later return engagement.*

Have tea and orange soda, wander, back in car and through long open spaces, little towns, fishing villages, memorials to WWII, cliffs, many scenic-type places to stop and stretch and learn something. We focus so much on Normandy and where our armies were, that it even comes as a surprise to be reminded of the devastation, sacrifice and heroism elsewhere. Who is provincial?

Orebic - Last town out. A regular local ferry plies back and forth all day there - cheap. Fast on, fast off (except for packing in the cars, see picture - but that is its own entertainment. Everybody leans over the rail to watch and applaud. 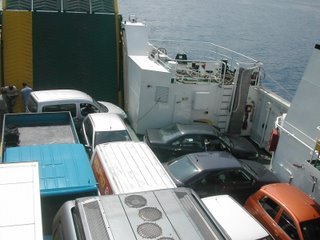 No advance ticketing needed here. Just get in line. The Orebic ferry leaves any time it is full. Even hourly, roughly. Plenty of rooms and hotels in the town. https://www.peljesac.info/orebic/.com

We got on line about 8AM and were on the first ferry from Orebic to Korcula.


Our car is this red one, bottom right. 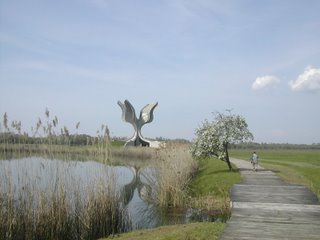 Jasenovac Concentration Camp, Croatia. Dan Widing walks the path to the Memorial
Reparations. Where, when, why. US begins paying out reparations from France to Holocaust survivors and their heirs.  Jasenovac is one of some 20-22 concentration camps in Croatia WWII, See http://www.holocaustresearchproject.org/othercamps/jasenovac.html. Will the families of the dead here, or survivors, have their turn. The US is glad to pass out the reparations of others  but so far unwilling to see the need in its own past.

Jasenovac is largely abandoned, with the museum shuttered, the memorial here a dry fount. Much was sent to Washington DC for displays there, also as a way of getting them out of sight. The impression here is one of forgetting, not memorializing.

1.  Setting.  At Jasenovac, follow the path anyway. It is set on railway ties leading past a lovely still pond to a deserted tulip-shaped, or flame-shaped monument, but the fountain-pool area inside runs dry.  There is no illumination to the flame, and the fountain inside runs dry. 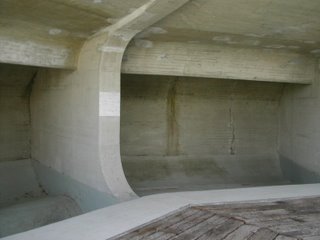 There is little left of this World War II concentration camp at Jasenovac, Croatia.


2.  Transport WWII prisoners. You can see a railroad spur, with a locomotive, caboose and boxcars that brought the people in, left as an exhibit. Its cargo long gone. 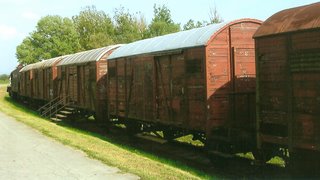 The location suits obscurity and fast railroad transit for patrons. Drive west from Zagreb to the agricultural panhandle of Croatia, on the motorway, toward Osijek. The town of Jasenovac, eponymous,is near the Bosnian border with no highway sign. There was only a turnoff at the approximate spot, to find the site, now just this thumb-in-your-eye ignored park.

3.  Minimal information. You will find little information of what happened here except for a Croatian language small relief map on a metal pedestal. Its relics and photos were apparently moved to the Holocaust Museum in Washington, D.C. See http://www.ushmm.org/museum/exhibit/online/jasenovac/.

But is that move just an excuse to get the nastiness out of Croatian memory, a short-lived fake attempt to memorialize something not featured at all now, so the place of Jasenovac both here and there is lost?
4.  Extent of killing.  There were some 83,000 persons killed, including children. See Jasenovac Memorial site at  http://www.jusp-jasenovac.hr/default.aspx?sid=6711 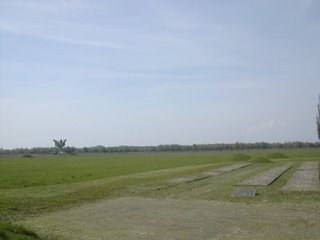 
5.  Obligation to remember.  Is there such? I understand that the area was destroyed in the 1940's, as also happened at much of Bergen-Belsen, and Buchenwald, then abandoned during the 1990's wars. See www.ushmm.org/museum/exhibit/online/jasenovac/.  What issues arise in maintaining sites for remembrance purposes.  See http://news.bbc.co.uk/2/hi/europe/7827534.stm

Even where there was destruction after WWII, many sites of other concentration and extermination camps offer museums and exhibits. Of those, only at Mauthausen, from our travels, can a traveler see almost all the original buildings and the work-death sites.  Should a museum or interactive displays at least should have been left open at Jasenovac. The area is essentially a wildlife preserve now, with a flat, mowed area with humps in the ground, and the outlines of rectangles, a museum building with windows broken and even the WC locked.

There was a bouquet of flowers from someone somewhere there, my notes note, but no memorials or even lists of names that I saw. There is nothing of the people who died there - not even stacks of glasses and shoes and passports and wallet photos and dental work, as at Auschwitz or Dachau.

7.  It is probably too late to reconstruct anything meaningful at Jasenovac. The Memorial Museum is locked and windows broken. 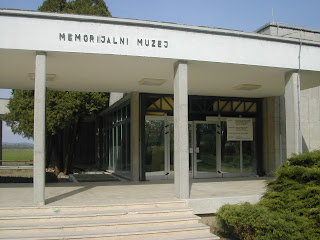 
If you go, you will be alone, except for a possible tractor and a cyclist or two. 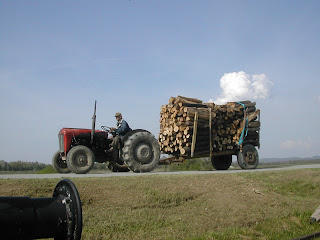 
At least look up the pictures of the horrors on the internet, and the discussions of religion-motivated executions, not just Nazi. Documents reviewed.
8.  Bottom line.  Lack of consistency in what messages are conveyed.

In Croatia, even the German soldiers get better treatment than do those killed by them. See the Zagreb post on Miragoj Cemetery. Lists of German names, birth dates, dates of death, even though in a common grave.  No complete listing of those killed at Jasenovac is at the site, that we saw. 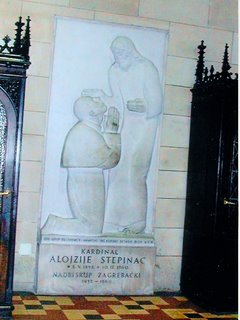 What was the role of Cardinal Stepinac: We understand he offered the Orthodox the chance for conversion to Roman Catholicism before they were killed; but took no steps to stop the killing.  Is that so unusual?  No.


* This is the burial place at St. Peter's, Zagreb, of Archbishop Aloysius Stepinac, who had a role in preventing/enabling deaths by Nazi, depending on what sources you believe, that some see as heroic, others as a betrayal. See, for example, http://www.grayfalcon.blogspot.com/2005/04/forgotten-genocide. for a blog on Jasenovac, including comments on Stepinac. See also http://www.emperors-clothes.com/croatia/stepinacfile.doc"  Is there pressure to keep Jasenovac under the radar for religious and political reasons?

There is an elaborate coffin on display near the altar in Zagreb at St. Peter's, that tour guides say is Stepinac's coffin, but other sources while we were there said he really is buried at the wall. See Jasenovac photos, discussion.

The era: Other exterminations. Jewish history in Croatia, including through WWII and after: See Jews in Croatia. The site points out that Dubrovnik has the second oldest synagogue in the world.
See http://www.holocaustresearchproject.org/othercamps/jasenovac.html.  That site is disturbing for its additional information, the role of Roman Catholic commanders, although the religion of any such participants in matters of the Holocaust was no deterrent to their activities.

Posted by Dint at 8:19 AM No comments: Links to this post

Walled cities on islands and peninsulas